We had our first run with the Jaguar Drivers Club of Australia - Western Register last weekend to Jenolan Caves. Unfortunately the old girl overheated and ruptured the radiator. It was a shame to spend bits of the run on the side of the road with the bonnet up waiting for the engine to cool down. (I suspected something was on the way out as she overheated a couple of weeks earlier while heading up Soldier's Pinch on the way to Blackheath.) 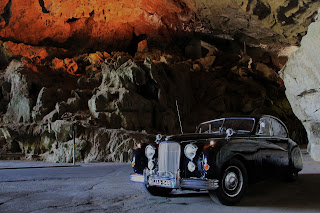 We managed to limp home from Jenolan Caves, thanks to some help from a fellow club member and a couple of bottles of coolant.

I had a custom made aluminium radiator manufactured by Aussie Desert Cooler in Melbourne and fitted it this weekend. The radiator was slightly larger than the original (even though I gave them the original to copy the exact size) and I needed to perform some modifications to the upper radiator support and bonnet catch panel.

The thermostat housing was badly corroded and had been patched up, so I decided to see if the equivalent part on the parts car was any better. After a clean up and a polish, it was pressed in to service.

After some chasing leaks (foolishly I was trying to re-use the original thermostat housing gasket) everything went together and the new radiator performs flawlessly, she sits rock solid on 160 °F when highway driving, even on a 30 °C day when going up hills. She's all ready for our run to Canberra next weekend for the Terribly British Day.

I picked up the 1956 Jaguar Mark VII M yesterday. It's been off the road for over 20 years. Now to decide what to do with it, parts mule, restore, hot rod or sell it to someone with the spare time to restore it? 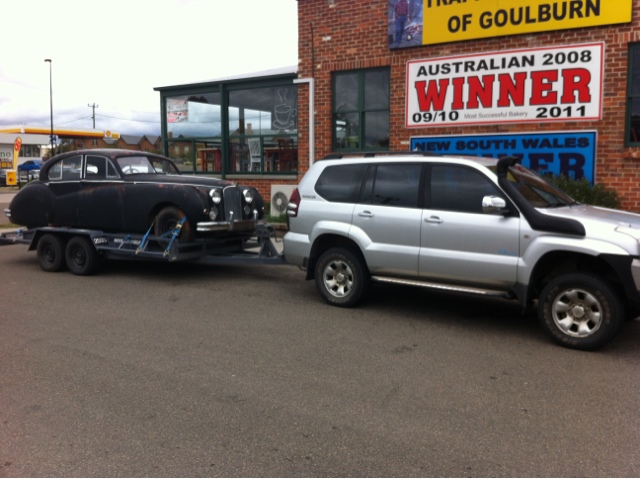 The old girl has been consuming fuel at quite a high rate since we got her. I recently did some calculations and it was worse than I thought, she's drawing fuel faster than our old Rolls-Royce Silver Shadow with its 6¾ litre V8! The Mark VII's six cylinder engine is only a 3½ litre! The Jaguar's fuel consumption is 19.5 litres per 100 km (12 mpg) averaged over four refuels. The Rolls-Royce averaged 18.9 litres per 100 km (12.5 mpg) over the same period of time.

I started by removing the spark plugs. They were quite sooty for what appear to be fairly new plugs - so I gave them a clean up, re-gapped them as they appear to have not been set to the required 0.022" from new, and re-installed them.

I then checked the points gap, they appeared to be on the required 0.012". They are in a crappy spot to work on, I've been spoilt in the past, Morris Minor distributors are in a very convenient location, even more so on the lovely side valve engine. The Rolls-Royce was typically easy V8 affair.

Then I proceeded to check the ignition timing. It was perfectly set to 5°, unfortunately it had been set to after TDC, not before! And the last tune was performed by a "qualified" mechanic! Lucky us mere amateurs are on the case. As soon as I started advancing the timing, the engine ran quieter and idled smother. I think the strange exhaust sound I was hearing was actually late combustion occurring in the exhaust port. I set the timing to around 7° BTDC and took the old girl for a 20 km drive. She seems to pull better and has more low end torque.

I checked the mixture of the front carburettor, if anything it was a little lean - not rich. I will leave adjusting the carburettors for another time.

I will be interested in checking the petrol consumption now I have fixed the ignition timing.

The steering column in the Mark VII Jaguar is adjustable for reach but our steering column was stuck in the fully extended position. The adjustment locking screw collar around the steering column was seized and no amount of brute force was going to shift it, I even tried with some multi-grips but it still wouldn't budge. I guess it's been this way for a while because I could see where someone else had swung off the locking collar and had slightly damaged it.

So I sprayed some Penetrene down inside the screw collar a few days ago, tied a rag around it and left it. I wasn't sure if it would work.

Tonight I was looking at the Manette Control problem when I thought I'd have a crack at the adjusting collar and blow me down it moved with the multi grips!

While I was fiddling with the steering column I corrected the wheel straight ahead position following yesterday's wheel alignment.

Getting the circlip off the end of the steering column was a pain in the arse, I faffed around for ages with my circlip pliers trying to get it off - ended up using a couple of screwdrivers and it eventually came off. So much for using the right tool for the job!

The wheel is now correctly oriented at the straight ahead position, the manette control stays straight and the trafficators automatically cancel! Good stuff.

Now I just have to fix the lazy trafficators!
Posted by Andrew Lark at 21:01 No comments:

What the heck is a Manette Control?

According to the Jaguar Factory Service Manual, that's the name for the control in the centre of the steering wheel with the horn button and trafficator control. 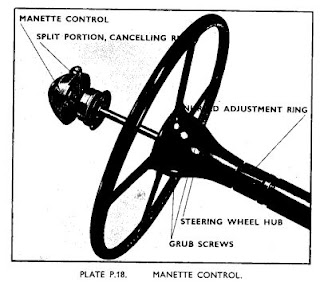 Unlike a conventional car horn button, the manette control does not spin with the steering wheel - it stays pointing straight ahead. Well it's supposed to anyway. This is not the case in our Mark Seven.

The manette control in our car spins with the streering wheel which is a pain in the arse when trying to activate the trafficators and it also defeats the self cancelling mechanism.

The control is held static by a "stator tube" that runs down inside the steering column, with the wires for the electric controls running within this tube. From what I can work out from the factory manual, the manette control has a short shaft (not sure exactly how long) that then interfaces with the main stator tube. I think it's this interface between the two tubes that is faulty in our vehicle, the join must be worn out allowing the control shaft to spin within the stator tube.

I'd love to hear from any other classic car owners who may have tackled this problem.
Posted by Andrew Lark at 20:12 No comments:

Took the Jaguar for a wheel alignment today. The steering was twitchy and the tyres squealed in faster corners.

Apparently the toe adjustment was miles out, -8.9 mm instead of the required 4 mm. -13 mm out! No wonder the steering was acting up.

She steers beautifully now, a bit of free play in the system as can be expected for a 60 year old vehicle, but the overall improvement is great.

I have to pop the steering wheel off the shaft and correct the straight ahead position. I will do this along with fixing the manette control (see separate post).
Posted by Andrew Lark at 19:54 2 comments:

Went for a five minute drive on Sunday arvo. This photo came out great. 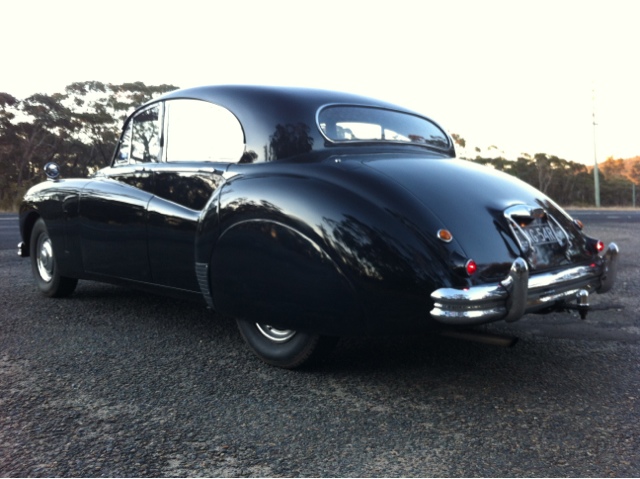